Helping you make the transition to a more eco-friendly lifestyle, one step at a time. Reducing waste, choosing sustainability, and giving back to the environment to stop climate change and take care of this shared planet on which we live. 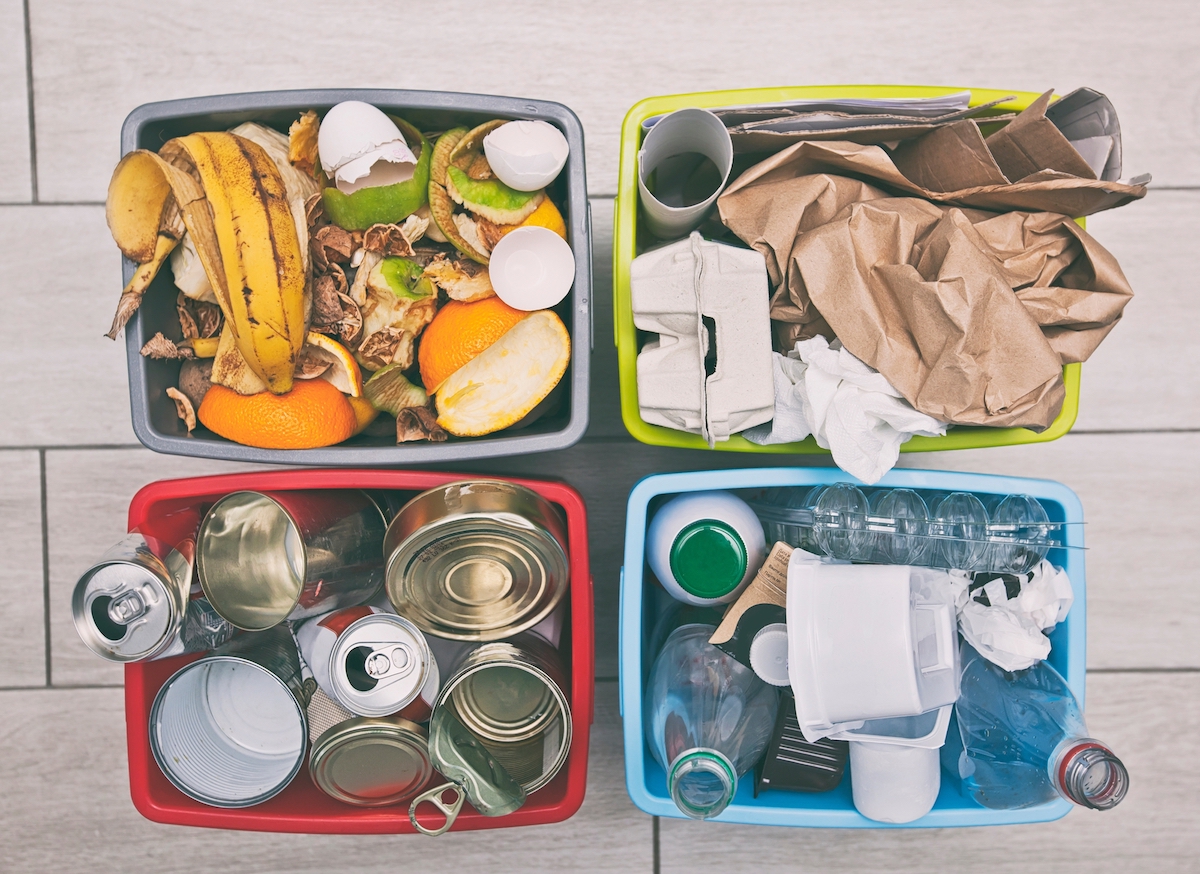 For years, I’ve been on a journey towards waste reduction. One year, we moved from the city to the countryside. I was a little excited to find out that trash services were not available at our new house. Sounds crazy, I know.

Reducing household waste is one of the goals that I am continually working on, and knowing that my family had to deal with every piece of trash that left our house seemed like a fair way to gauge how much progress we’d made.

Just becoming aware of trash, in general, made a significant impact on me. I had been learning the art of reusing items, avoiding single-use products, buying package-free produce, and opting to buy bulk in refillable containers. That wasn’t enough to make a noticeable dent in the amount of waste that left our home.

When I was a kid, my family lived in the country; my mom carried our trash to the city dump. My dad burned any paper trash, like junk mail, that we had. Most of our neighbors did the same; some likely still do. I’m not sure if anyone was aware of the problems caused by backyard burning.

In the past, backyard burning may have been the only way that many rural Americans could get rid of their waste. EPA.gov

Most people who burn their waste do not realize how harmful this practice is to their health and the environment. Current research indicates that backyard burning is far more damaging to our health than previously thought. It can increase the risk of heart disease, aggravate respiratory ailments such as asthma and emphysema, and cause rashes, nausea, or headaches. Backyard burning also produces harmful quantities of dioxins. It is a group of highly toxic chemicals that settle on crops and in our waterways where they eventually wind up in our food and affect our health.

Typically, dioxins occur when one burns waste, they do not exist in materials before incineration. Significantly higher levels of dioxins are created by burning trash in burn barrels than in municipal incinerators.

Household burn barrels receive limited oxygen, and thus burn at lower temperatures, producing not only dioxins but a great deal of smoke and other pollutants. Unlike the barrels and boxes used in backyard burning, large incinerators are required by EPA regulations to have stringent pollution control systems that reduce dioxin emissions primarily by preventing their formation. Backyard burning is also particularly dangerous because it releases pollutants at ground level where they are more readily inhaled or incorporated into the food chain. ~ EPA.gov

For many years we lived in neighborhoods where trash service was available. Having a trash service is an easy way to NOT think about where stuff ends up when we throw it away in the first place. Our pick up time was before the crack of dawn, every week, they came while it was still dark.

Sometimes I would hear the trash truck coming and jump up to see if my son or husband had wheeled the can down our triple black diamond (super steep) driveway. In the case they forgot, we either paid for a special pick up or hoped that we’d have enough space to last until the next pick up.

I’d see our trash and then stop to think about the sheer quantity of what we were discarding. Once you become aware of the problem, it’s hard to become unaware of it again. Still, I plodded on making my effort.

Becoming aware of the waste stream means that we are investigating what happens to the garbage we produce. From raw materials, to waste disposal, where does everything go and what amount of materials end up in the landfill?

When recycling was available, I tried to do my part by separating recyclable items. When I requested my recycle bin in Knoxville, I realized that there was a problem that recycling was not going to fix. Before I ordered the recycle container, I drove to the recycling center when our cardboard pile got big. Recycling cardboard is an eye-opening experience, especially if you use Amazon as regularly as I had been. Just try saving up your Amazon boxes for a month. Doing that also caused me to cut back on how much I used Amazon.

Once we got the container from our waste management company, the recycling got picked up every other week. When I received our recycling container, there were no instructions as to what to recycle or how. So I did some research and found out everything went into one container that someone else sorted through. Recycling also meant that I had to take an extra step; for example, rinse containers first.

Recycling is a flawed system

Later, because of the mixed recycling can system, the city removed all types of glass from the list of recyclable items with the following notice:

This change is due to the fact that when glass is co-mingled with other recyclables in the same cart it easily breaks into tiny pieces that contaminate the other recyclables, thus creating a very low-quality product for which there is zero market for. This type of end product cannot be recycled. In order to ensure that we maintain a viable curbside recycling program, glass had to be removed from single-stream. glass is recyclable only when brought to a drop-off center and separated by color. We understand the inconvenience of this and we want to encourage residents to continue recycling glass so please do reach out to us for suggestions on where additional glass drop-off centers would be beneficial. ~ Knoxville City Waste

So I still had to drive to the recycling center to recycle glass from spaghetti sauce, sparkling water, and such. Glass of different colors is recycled separately, so it is also necessary to sort green from brown from clear when you get there.

Similarly, this is why plastic straws do not get recycled. While straws are often made from recyclable materials, they are so small they end up jamming the equipment and are therefore not genuinely recyclable.

At our new house with no trash pick up, I made even MORE of an effort not to buy products with excess packaging. It’s an eye-opening endeavor to start noticing just how much unnecessary waste is used for packaging many items.

The designated area where we should be able to take our waste and recycling was not complete or ready for recycling so we had to carry it further if we wanted to recycle. I asked about the absence of recycling bins when I brought my sorted recyclables to the center. While we waited, I took our recyclables to another location a bit further away.

The work in recycling

I’m not going to deny that it takes more effort to recycle, search for products with less packaging, buy in bulk, bring my containers and such. However, I will admit that I feel a certain sense of accomplishment when I empty my recycling bin and when my husband says he notices a definite decrease in the amount of waste that leaves our house.

Recycling does take effort, as well. If someone tosses a bag of household trash into a recycling bin, the entire load can be contaminated and rendered useless.

I believe that I have a better outcome when I use less natural resources from the start by attempting to prevent waste rather than recycle it. One of the best decisions I’ve made that has the most environmental benefits is to properly dispose of organic waste.

One thing that has been helpful for me is acknowledging that what I do, even if it is small, makes a difference. It helps to resist the urge to be a perfectionist about it, which is why I don’t say “zero waste.” Instead, my goal is “waste reduction” because it’s less stressful. Zero reminds me of “never” and “always” in its absoluteness. Perfection is a paralyzer.

Composting food scraps such as peelings, coffee grounds, eggshells, and such is another way to cut down on how much you send to the landfill.

What you can compost:

stuff not to compost

My compost goes back into gardens, and in return, I receive a yield of vegetables. A year later, we moved back to the city, into an apartment complex. I set up boxes to recycle in my laundry room, and instead of a 13-gallon kitchen trash can, I put a smaller 2.5 gallon can in my kitchen.

I try to see how long I can go without having to take out the kitchen trash. Part of that effort means breaking down paper boxes to make them flat; they go with mixed paper recycling. Another part means not putting food waste in the bin. Since I don’t have a yard, I use a food cycler or a compost pick up service. Just keeping food waste out of your kitchen trash is very beneficial.

Unfortunately, I can see the dumpster from my apartment balcony. It is an eyesore and a painful reminder of just how wasteful we are as a society. Typically the trash is overflowing; sometimes, bags even pile up on the outside. I have even seen hazardous waste in the dumpster there. Seeing all that trash pile up can be very discouraging.

So, I launched a meetup group, Waste Free Tennessee, which became a website. Now you are here, reading this and hopefully, you are about to share your tips or your journey with me. Together we can keep reducing waste and making the planet a healthier place.

Find out when we launch Waste Free Workshops – get on the waitlist!

424 thoughts on “My Personal Journey with Waste Reduction”